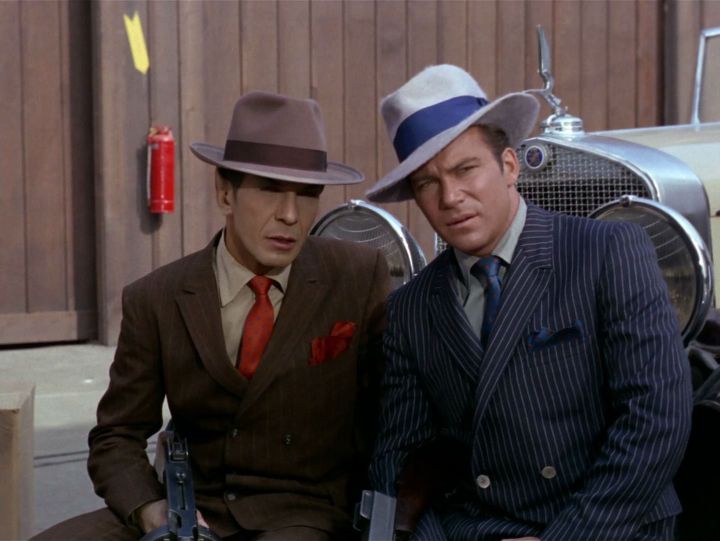 Back in 2006, Tokyopop, a US based publisher of Japanese style manga comics produced a volume of new manga style stories featuring the cast and concepts of the original Star Trek series. A couple of more volumes appeared in the following year, and as we were working with Tokyopop on GOD SHOP our planned manga series at the time, I was asked to pitch several story ideas for the Trek series. This was pretty much a dream come true to be asked to pitch for Star Trek. Although none of my ideas were picked, it was an honor to even be asked.

While hunting through some old files the other day I came across a document outlining those long forgotten attempts to help guide the adventures of the crew of the U.S.S. Enterprise, and thought it might be fun to share a few of them here.

Two years after its original visit to Sigma Iota II (in 2268 in TOS episode “A Piece of the Action”) the Enterprise returns to see how its “gangster culture” has progressed. The planet is now run like late 20th Century Las Vegas with the “mobsters” controlling strings of casinos. The landing party is captured by the current boss and Kirk must play a high stakes card game for the lives of everyone being held hostage. The game is “Fizzbin” an imaginary game invented on the fly by Kirk as a ruse during their previous visit. However the Iotians – known to be highly impressionable – have developed the idea into a real game. Can Kirk bluff his way out of this one, or will he be forced to play a game where he doesn’t know the rules? As the game progresses it turns out that the game’s underlying complex logic means that it is Spock who is the best player and wins the crew’s freedom.

A young Klingon warrior is chosen by the empire for training on a special mission. A mission to totally eradicate one of the empire’s greatest foes. As the training goes one, the young warrior begins to wonder the exact nature of the foe he must face. Eventually he boards the ships of the armada being assembled to obliterate the foe’s homeworld, and once on board he learns that he has been assigned to take part in The Great Tribble Hunt.

During a visit to a starbase Ensign Chekhov is nearly bowled over by a group of unruly kids. Deciding to try and calm the youngsters down he decides to tell them one of his classic “Russian” folktales. The tale he decides to tell is his version of the Three Little Pigs, in which the characters he describes pay more than a passing resemblance to Kirk, Spock and McCoy, while the Big Bad Wolf is portrayed by Khan. Unknown to Chekhov the three officers are stood behind him listening to his tale.

WAGON TRAIN TO THE STARS

The Enterprise encounters a convoy of old Earth ships deep in space being attacked by a hostile force. The Earth ships are clustered together for protection. The Enterprise arrives and scatters the attackers. The Earth ships belong to a collection of unauthorized colonists who had decided to set off on their own to find a new home on the frontier and had based their journey on the early American pioneers. Despite the unauthorized nature of the venture, Kirk decides to give them needed supplies and point them in the direction of the nearest uninhabited Class-M planet. The Enterprise crew is impressed by the spirit and determination of this “wagon train to that stars.”