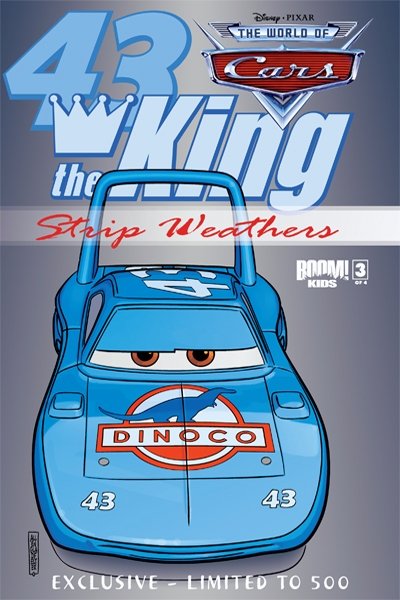 The third issue my Cars: The Rookie series debuted around the same time as that year’s Heroes Con held in Charlotte, North Carolina; the heart of NASCAR country and home to many of the race teams. To mark the occasion a special limited edition of 500 was produced with a cover spotlighting the Strip Weathers character (above), based on, and voiced in the movies, by legendary 7-time NASCAR champion, Richard “The King” Petty.  One of my prized possessions related to my time on CARS is a poster sized copy of this special cover signed by Richard Petty himself. – A special thanks to cover artist Allen Gladfelter who made that happen.

For this issue I continued the TV interview framing device, but this time had Strip Weathers tell the story of how he had first seen the young rookie McQueen in testing and been impressed by him, which then led into a flashback sequence of McQueen’s first Piston Cup Race at the “Beachside 500.”

I have a vague memory that my friend, and occasional creative partner, Paul Benjamin, who was writing the Monsters Inc. comic at the time, and I talked about trying to sneak in some mutual cross-references into our scripts at this point. I think I asked for some of the gate signage at the entrance to the race track have the Monsters Inc. logo and Paul asked for one of his characters to be drawn playing with a Lightning McQueen toy car; but it didn’t work out. – Shame it would have been a fun Easter Egg moment.

Also on the art front, it was important for a pay off on the last page that McQueen’s race livery was just plain red with the 95 number and a single Rust-Eze logo on the hood at this point. Thankfully my description in the script was followed to the letter (not something that always happened in later issues).

One of the things I wanted to establish in this issue was why McQueen couldn’t keep a crew chief. I played up that having only recently come up from local events that he was used to working on his own, and that he felt himself to be a “one-man show.” It was a nice throw away line that highlighted his selfish character trait (at this point). It also provided the catalyst for him being taught a lesson when he comes in to the pits for fuel and tires and the crew don’t move, reminding him that he is a one-man show and should  be able to do it all himself.  His reluctant apology results in him getting the fuel and tires he needs. Once back on track he tries to use some of his old local track “bulldozer” racing techniques, but they don’t work and he is quickly schooled in the realities of big league racing, especially by Chick Hicks who doesn’t take kindly to the new kid on the block.

McQueen ends up third (appropriately enough for the third issue of the series) behind Weathers and Hicks.

The issue ends back with the Strip Weathers interview who let’s it slip that he was so taken with McQueen’s zig-zag attempts to overtake in that first race that he told the young racer that he looked like a streak of Lightning. 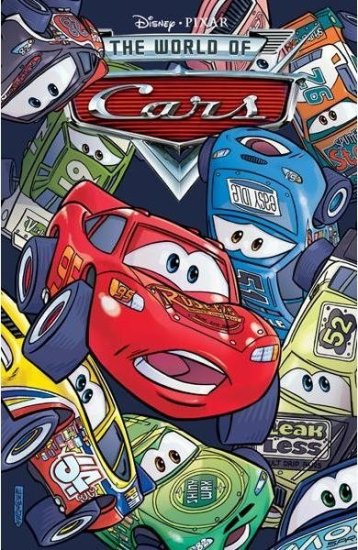