So I had been given the go-ahead to write a four issue story line to launch the first CARS comic book series. Where to begin?

To make sure we had an audience the decision was made that rather than an on-going series we would launch with a mini-series to be titled The World of CARS: The Rookie.

My pitch for a prequel story had been to explore the line from the first CARS movie where the lead character, Lightening McQueen, was introduced as “The year’s rookie sensation.” What made him a rookie sensation? How did he arrive on the Piston Cup racing scene.

My idea for the four issue arc was to have a bookend of McQueen being interviewed just before his intro in the movie, and as he told his story in typical self aggrandizing style it would continue in captions as a voice over while the art and dialog showed what actually happened.

After the two page intro the action flashbacked to young aggressive “Bulldozer McQueen” in action on a local short track. And promptly broke one of the Disney rules; when I’d landed the gig I’d asked what the rules were. I was told:  “(1) Don’t create any new characters (2) Don’t write anything that will be in CARS 2.” Of course I asked “Does that mean you’re going to tell me what will be in the next CARS movie?” – The answer was “No. But if you do something we don’t like we’ll let you know.” – Well Rule #2 would come in to play later, but for the first issue I broke Rule #1 on page 3 by introducing two stupid race cars numbered 66 and 99 so I could do a joke about the numbers being flipped when one of them rolled over after being barged off track by McQueen.

Not only did I get away with that in the pages of the comic, those two guys ended up on the cover, and on the poster used to promote the Free Comic Book Day version. 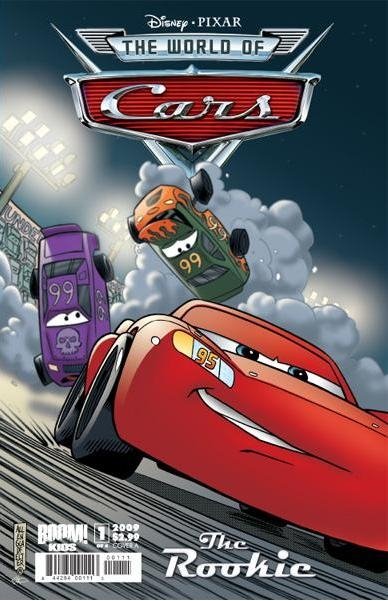 The  track I chose for the introductory action was modeled on and named for Thunderhill Raceway, our local short track just south of Austin, TX where the family spent many Saturday nights watching some great local racers in action.  About six months after the book came out I got to do an signing at the track, which was a cool event.

After wrecking at the track’s championship race I had the dejected McQueen meeting Mack for the first time. At this point in the story Mack held ambitions to be a race transporter and had studied race car dynamics and was able to offer McQueen some unwanted advice. But poor Mack was stuck working for Eggman Movers – a nod to the moving company featured in Toy Story.  When Mack says that he’s friends with the truck for the leading Dinoco team and could get McQueen into the Piston Cup test sessions a reluctant partnership is formed.

Shortly after this first issue was completed we found out that the book had been selected for BOOM’s Free Comic Book Day title, which meant a 100,000 print run of the FCBD issue. The original plan was to run an interview with me and a few pages of my original script in the back of the FCBD issue, but they were replaced by some preview pages previewing the upcoming Incredibles title by Mark Waid instead which made a lot more commercial sense. Free Comic Book Day that year was special as I ended up doing signings at three different stores across Austin and met a lot of CARS fans of all ages.

The first regular release came with two covers, which became standard procedure for the rest of my CARS issues. It debuted fairly high in the comics sales charts – the best selling all-ages comic that month – and soon sold out with a second printing under yet another cover issued.

Then more special covers were issued for the Emerald City Comic Con, and even a 1:25 store incentive version. – We were of to a great start. 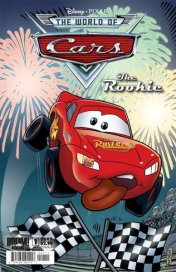 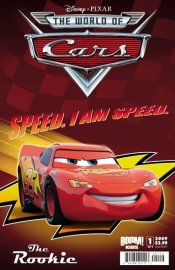 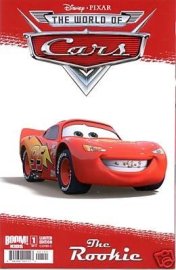 The voice cut across the hotel lobby with the subtlety of a sledgehammer meeting a sheet of plate glass. Every conversation stopped and a percentage of heads turned to identify the source of the strident location finder.

She stood imperiously at the far corner, as far physically from anyone else as possible with her right arm raised, her be-ringed finger pointing in the direction of the aforementioned stairs.

This was a woman who demanded attention, even if she rarely received it. Physically small in stature she projected a voice that seemed impossible for someone of her build. Her lung capacity must be formidable. The lean worn face wore a haughty air of frustration beneath a layer of inexpertly applied make-up. Her bleached blonde hair fell straight and limp. Her shirt displayed a cascade of fringes and garish embroidered patterns of indeterminate origin. The fashionably torn jeans tunneled into a pair pf cowboy boots which seemed to be equally adorned as the shirt.

The woman shrugged, turned, and entered the open elevator doors behind her. The door slid shut and she disappeared from sight.

Conversations resumed, while a few of the hotel guests looked around to see who the directive had been intended for, yet no-one seemed to move in the direction of the indicated stairs. – The recipient remained a mystery.