June was a month of Conventions and Quatermain. So let’s start with our favorite jungle adventurer. As I mentioned in last month’s Ramble I’d heard that there was an audio edition of my Allan Quatermain story “Golden Ivory” in production. Well a few weeks ago it was released on Audible.com for download and your listening pleasure. As a side note voice actor Jem Matzan posted an interesting article on his blog about how he decided on the different character voices. Its an interesting behind the scenes insight into a side of producing an audio adaptation that I hadn’t thought much about. When I write a story the characters tend to have distinctive voices in my head, but I never imagined having to produce those voices for real, and how you would go about that.

This month I also finished and turned in my new Allan Quatermain novella “Stones of Blood.” The story is scheduled to be included in the upcoming second volume of Allan Quatermain: The New Adventures. I can’t say much about the story as yet, but as a taster it does include a reference to this somewhat incongruous historical scene. 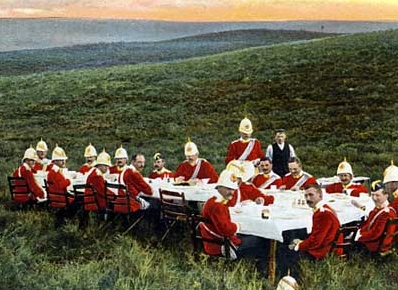 The two conventions in June were very different in size and scope, but were both great fun. Early in the month was the Peoria Artists and Comics Expo, just in its second year. It was a friendly local con, and we had a great time chatting with a lot of first time convention goers. I also participated in a panel entitled “Storytellers” which proved to be a fun exchange with a interested and engaged audience.

The following weekend I was off to Houston, Texas for Comicpalooza. I last did this show four or five years ago, and boy has it grown in the meantime. Now covering all three floors of Houston’s main convention center, it was a lively and bustling show with something for every member of the family, and every branch of pop-culture and science. It was also one of the best organized large conventions I’ve attended. I appeared on several panels covering subjects such as “Marketing for Writers,” “What Editors Really Want,” “Sherlock is Everywhere,” and “Alternate History.” All were great subjects and the panels were fun and informative. I also got a chance to catch up with several friends, and make a few new ones along the way. One of the highlights of Comicpalooza for me was the “Pros At Cons” podcast interview I did with the team from CCP Comics. It was one of the most relaxed and wide ranging interviews I think I’ve ever done. You can find it on-line at SoundCloud.

Next up on the convention list is a return to one of my perennial favorite events, ArmadilloCon in Austin, Texas. You can catch me there between July 29th and 31st.

Writing-wise the focus for July will be the continuing work on planing and plotting the last three issues of the FORGOTTEN CITY comic book series, and the ongoing editing and rewrites for the James Bond Lexicon project.

Have a fun summer, and I’ll be back next month with more updates.